Furthermore, we also believe in the resurrection of the dead, for there really will be one, there will be a resurrection of the dead. Now, when we say resurrection, we mean a resurrection of bodies. For resurrection is a raising up again of one who has fallen. But, since souls are immortal, how shall they rise again? Well if death is defined as a separation of soul from body, the resurrection is the perfect rejoining of soul and body, and the raising up again of the dissolved and fallen animal. Therefore, the very body which is corrupted and dissolved will itself rise up incorruptible. For He who formed it in the beginning from the slime of the earth is not incapable of raising it up again after it has again been dissolved and returned to the earth whence it was taken by the decision of its Creator… …And so, with our souls again united to our bodies, which will have become incorrupt and put off corruption, we shall rise again and stand before the terrible judgment seat of Christ. And the Devil and his demons, and his man, which is to say, the Antichrist, and the impious and sinners will be given over to everlasting fire, which will not be a material fire such as we are accustomed to, but a fire such as God might know. And those who have done good will shine like the sun together with the angels unto eternal life with our Lord Jesus Christ, ever seeing Him and being seen, enjoying the unending bliss which is from Him, and praising Him together with the Father and the Holy Ghost unto the endless ages of ages. Amen.

This week the Church will be open on Thursday, May 26th from 9:00 a.m. - 1:00 p.m.  If you would like to see Father for confession or just to chat, please make an appointment.

Volunteers are needed to cook or provide take-out for two homeless families. Meals will be delivered to to 2501 Milltown Rd (across from St. Michaels)
on Monday, June 6th, Tuesday, June 7th, or Thursday, June 9th, at 6:00 p.m. Please sign up on the poster board in the Narthex.

If there is enough interest, we will attempt to have some summertime play-dates/meet-ups for the children of the parish.  Families who participate will be responsible for "hosting" two gatherings in the course of the summer, which can be as simple as: "We are meeting at the Lums Pond Playground this Tuesday from 9:30-12:30, bring a sack lunch." If we can make it happen, perhaps we can get a group for a Blue Rocks Game or a museum visit. Here's a link to the Google Form: https://forms.gle/UBaCjYok8UQrgS7D8 This info will be valuable for planning events that are convenient & interesting.

As we are finishing up the school year, we would like to invite the youth of St. Michael's to share their gifts with us in a cultural evening - music, oration (poetry or prose), dance, etc, on the evening of the Feast of the Ascension, June 2nd, 6:30pm, at St. Michael's. Adults, please bring a heavenly potluck dish to share. Please email me (elizabeth.clause@gmail.com) if your student would like to participate and the details of what they will
perform, to be listed in the program.

St. Tikhon’s Memorial Day Pilgrimage is back! While there are events throughout the weekend, the main day is Memorial Day itself - Monday, May 30th. The miraculous Iveron icon will be present.

Archbishop Mark has rescheduled with us due to his missed Spring visit - He will be with us the weekend of July 30th-31st. (He will still come in the Fall as well.)

The current plan is to rent a U-Haul to remove the remaining items from the church basement on the morning of Saturday June 11th. We will need probably four strong men to help with lifting & carrying. If there is something you would like, but couldn't figure out how to get it to your house, we could possibly (depending on mileage) deliver it when we take unwanted things to Goodwill. There will be sign-up forms in the Narthex on Sunday. If you can help with this phase, please contact Elizabeth Clause (elizabeth.clause@gmail.com).

The flooring is now finalized - note the wood floors upstairs and the new carpet in the stairwell. A few other spot fixes were performed as well.

Next up: Update of our emergency lighting and install of the chandeliers.

The diocesan summer camp is July 3 - 9 this year for children ages 7 - 17.  To sign-up, please find the forms on the website: www.sttikhonscamp.org. 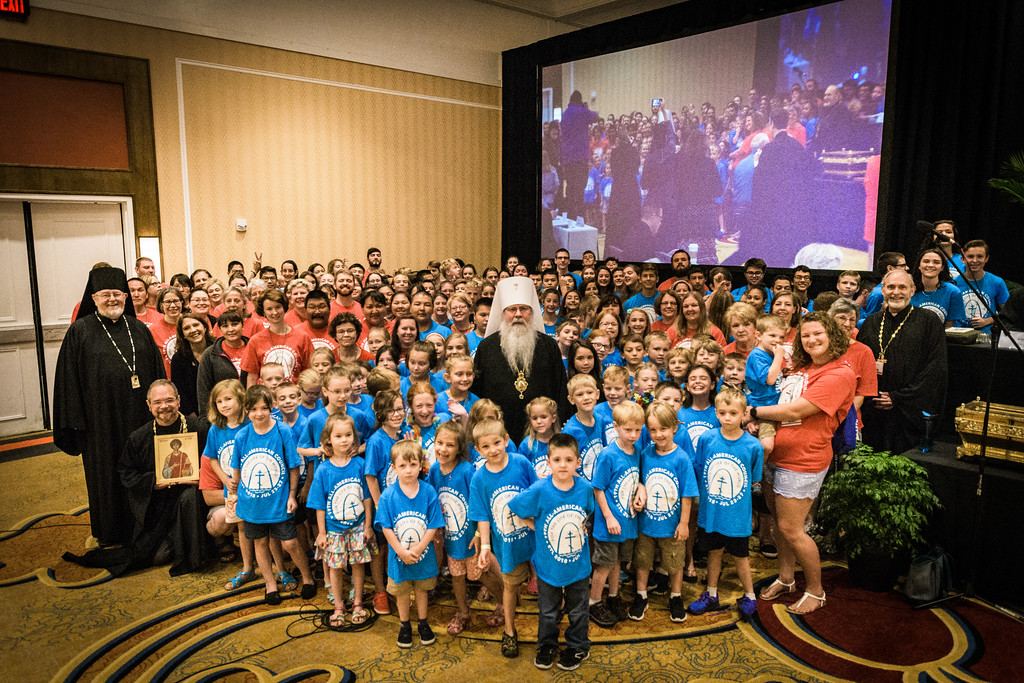 Youth at the 19th AAC in Saint Louis, MO

A robust and inspiring youth program is planned for the 20th All-American Council in Baltimore, MD, July 17 - 22.  Youth planning to participate and adults seeking to help at the event are asked to register ...

Online Registration is now open for the 2022 Parish Development Forum, to be held from 10:00 AM EDT to 5:15 PM on Friday June 17.  The Forum is co-sponsored by the Orthodox Church in America’s Archdiocese of Western Pennsylvania, the Diocese of th... 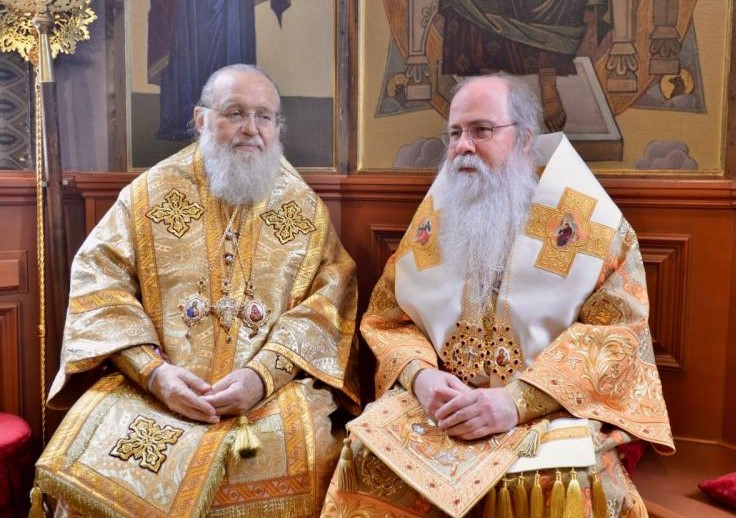 Metropolitans Hilarion and Tikhon at the Novo-Diveevo Stavropegial Convent of the Holy Dormition, Nanuet, NY in 2018.

On May 16, 2022, His Beatitude Metropolitan Tikhon sent letters of condolence to His Holiness Patriarch Kirill and to the Holy Syn...

On Wednesday, May 18, 2022, Archpriest Alexander Rentel, Chancellor of the Orthodox Church in America, made the following statement: 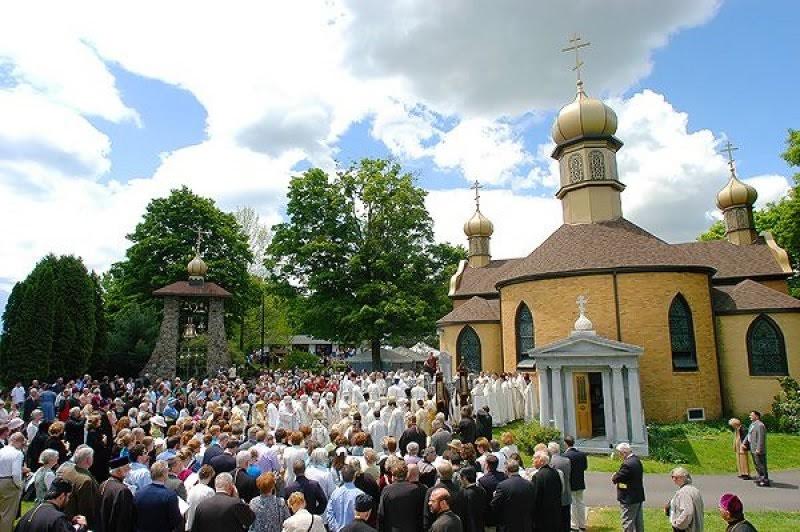 The brotherhood of the Monastery of Saint Tikhon of Zadonsk is pleased to welcome pilgrims to the annual Memorial Day pilgrimage from May 27th to May 30th, 2022. His Beatitude Metropolitan Tikhon and the Myrrhstreaming Hawaiian Iveron Icon of the ... 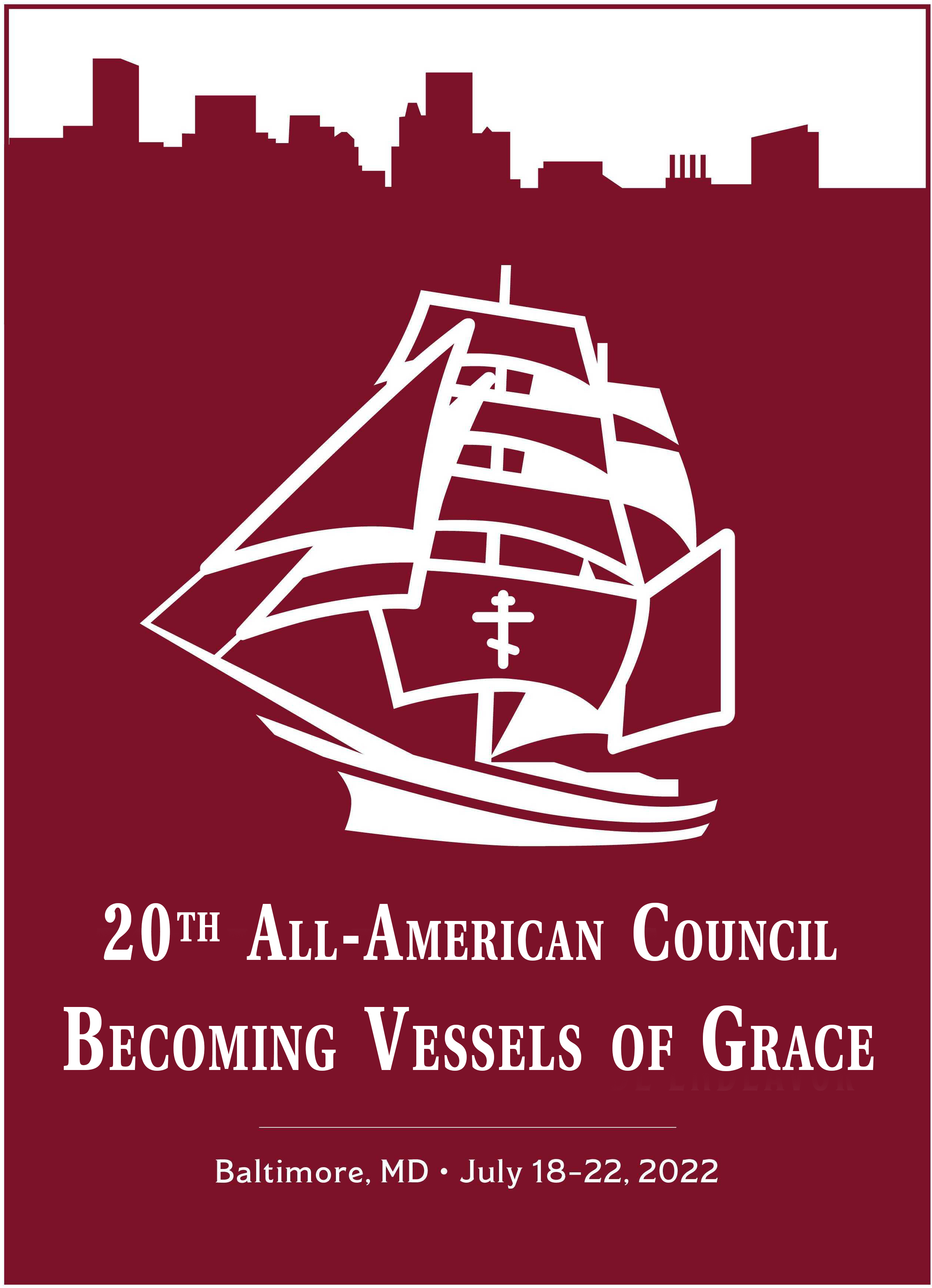 The 95th Annual Convention of the Fellowship of Orthodox Christians in America (FOCA) will be hosted this year at the Hilton Baltimore Inner Harbor Hotel, Baltimore, MD from July 15-18, 2022.

The FOCA Convention brings together the membership of...

With the approval of the Metropolitan Council and the Holy Synod of Bishops, and upon recommendation of the Preconciliar Commission, the Schedule and Agenda of the 20th All-American Council are now available.

These two documents, along with a num...

The March and April “Pastoral Changes” — the official announcements of ordinations, assignments, releases, and related matters affecting the clergy of the Orthodox Church in America, as issued by the Office of the Chancellor, Archpriest Alexander ...

With the blessing of His Beatitude Metropolitan Tikhon, Archpriest Alexander Rentel, OCA Chancellor, traveled to Europe from March 23 to April 2, 2022 to see first hand the operations of Eleos and its humanitarian efforts for the Ukrainian refugee...

Ascension of Our Lord

The Mission of The Orthodox Church in America, the local autocephalous Orthodox Christian Church, is to be faithful in fulfilling the commandment of Christ to “Go into all the world and make disciples of all nations, baptizing them in the name of the Father, and of the Son and of the Holy Spirit…”

St. Michael's is part of the Diocese of Eastern Pennsylvania, which is presided over by The Most Reverend Mark (Maymon), Archbishop of Philadelphia and Eastern Pennsylvania. Our mission is bringing the joy of Christ's resurrection to those who have never heard the Good News, and to strengthen and encourage the faithful who reside within Wilmington and the local area.

The Holy Scripture is a collection of books written over multiple centuries by those inspired by God to do so. It is the primary witness to the Orthodox Christian faith, within Holy Tradition and often described as its highest point. It was written by the prophets and apostles in human language, inspired by the Holy Spirit, and collected, edited, and canonized by the Church.

Holiness or sainthood is a gift (charisma) given by God to man, through the Holy Spirit. Man's effort to become a participant in the life of divine holiness is indispensable, but sanctification itself is the work of the Holy Trinity, especially through the sanctifying power of Jesus Christ, who was incarnate, suffered crucifixion, and rose from the dead, in order to lead us to the life of holiness, through the communion with the Holy Spirit.